Recently I saw a video on youtube where a celebrity was talking about how he likes to cook and in the video he said that he only uses cast iron pans and pots because non-stick pans are incredibly toxic. This drew some concerns in me because I love to cook and typically most of my cooking is done in non-stick pans (due to cast iron conducting heat too quickly leading my food to sometimes burn). I decided to look further into this and read an article by Healthline about nonstick pots and pans and if they are actually toxic. Healthline conducted interviews and investigations into the allegations of nonstick pots and pans being toxic and found some alarming facts about the subject. Typically nonstick cook wear is made from a compound called Teflon (polytetrafluoroethylene or PTFE and although this compound has been found to not be toxic to humans, one of the compunds that makes Teflon is extremely toxic. This compound is called perfluorooctanoic acid, or PFOA for short. PFOA has been found to cause thyroid disorders, chronic kidney disease, liver disease and testicular cancer. And due to this regulations came out banning the manufacture of nonstick pans which have PFOA. Since this kitchen wear manufacturers have begun manufacturing items coated with Teflon differently to insure that the Teflon coating contained no PFOA. This is done at the manufacturing stage by heating the compound to enormous temperatures to insure that all the PFOA in the coating is burned off. However there are still concerns regarding the non-PFOA Teflon compound now used in nonstick cook wear. If heated to extremely high temperatures (above 570°F) Teflon begins to breakdown and release toxic fumes in the air, but these fumes are much less harmful then that of PFOA. These Teflon fumes have been known to cause polymer fume fever, or Teflon-flu. Teflon-flu occurs roughly 4-10 hours after exposure and typically resolves quickly after 12-48 hours. The symptoms include fever, chills, headaches and body aches. But all of these symptoms are quite temporary and only occur if you heat the pans coated with Teflon to very high temperatures. So in conclusion although Teflon coated pots and pans were once toxic, the EPA has enacted regulations to eliminate this risk as long as you purchase nonstick pots and pans that were made after 2013.

There are very few things that I enjoy more than politics, government and law. And although I could rant on and on about those topics I do not believe I could do then justice due to the exhaustive content involved in those topics. Due to this I have instead chosen to blog about cooking, one of my all time favorite hobbies and pastimes. 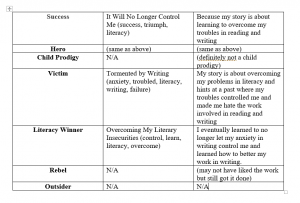 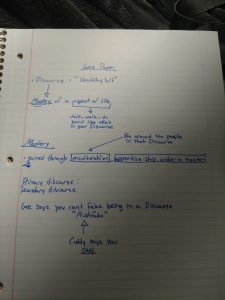 Fake it ‘Till You Become it Rough Draft 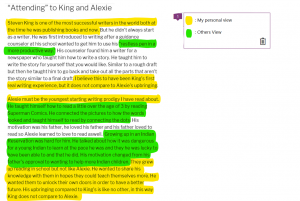 In the above screenshot I used an assignment I recently had to  do identify my voice markers and other peoples voice markers. In this assignment I compared Steven King and Sherman Alexie and who I believed had the better upbringing which pushed them towards writing. Whilst re-reading this I saw that I engaged two perspectives, my own and the author’s of the writings we based this off of. If I were to re-write it I would add more of both perspectives by putting more direct quotation and more of my spin of the quotations. I believe I made my voice markers prominent but could make the author’s better by using the direct quotation.

1.) Graff and Birkenstein explain that most writers (certainly of academic essays) are responding to what others have said, and they tell us to look for what motivates these writers. By entering a conversation, according to them, a writer has to represent what’s been said and move beyond it in some way. So, what are some of the views Gee responds to? Remember, he may name them explicitly; they may sometimes be implied, or they may be “something ‘nobody has talked about’” (Graff & Birkenstein 179).

Gee used a study by F. Niyi Akinnaso and Cheryl Ajirotutu in which they gave two mothers on welfare a simulated job interview. Gee found that one of the mother’s displayed improper dialect in the professional environment. He used this data as a way of showing readers how each environment requires a different dialect and how she did not display the values and morals required for this discourse. He also compared the other woman who used very professional dialect but lacked in knowledge and experience. Both women would most likely not be hired for the position due to lack of knowledge of the discourse which Gee says is true as well.

2.) Look specifically at paragraphs 3-4 in which Gee discusses Akinnaso and Ajirotutu’s research. Use evidence from the text to explain why Gee is critical of their analysis. If he doesn’t agree with their assessment, why would he give them so much space and so early in his own essay?

Gee is critical of their analysis because they provide a great example of Discourse and how dialect, experience, posture and professionalism won’t always get you the job you want. He says the best way to get a job/be apart of a Discourse is to completely absorb all the values, morals, dialect, social aspects, etc. of the Discourse then maybe you will be able to get in.

3.) Although Gee is a linguist, he says that “literacy studies” should focus on “social practices” instead of language (5). In fact, he claims that “what is important is not language…but saying (writing)-doing-being-valuing-believing combinations” which he calls “Discourses” (6). Using evidence from the text, explain why Gee thinks it’s important to distinguish this “combination” from language alone. What’s an example of a “Discourse” you could add to Gee’s examples that would illustrate this concept and its importance?

Gee is correct in my opinion in this statement. Just being able to speak the same language and maybe in a similar way does by no means make you a part of the Discourse (unless your going into a discourse of imitators). The best way to become part of a Discourse is by doing, being and valuing the same/similar things the people in the Discourse do. Say for instance you want to be on a lacrosse team (lacrosse Discourse). You cant just understand the game (it will help though) and talk about the rules of the game to them and be a part of the Discourse. The only way to be in the lacrosse Discourse is to be a lacrosse player which entails you to do-say-be and value the things that the lacrosse players do.

4.) As important as Discourses are for Gee, however, he explains that they are not “bodies of knowledge” that can be taught: “while you can overtly teach someone linguistics, a body of knowledge, you can’t teach them to be a linguist, that is, to use a Discourse” (7). How, then, does one become a linguist (or nurse, biologist, lawyer, sports announcer, etc)? Find a direct quotation from Gee on which to base your response. What in your experience would support Gee’s claim, and what if anything would complicate it?

Learning chemistry does not make you a Chemist. It merely makes you a student of Chemistry because you are not fully apart of the Discourse. You become part of the Discourse and gain the title Chemist by doing-speaking-valuing and becoming what a Chemist is. Gee says that when he was being trained as a linguist he had to learn to “speak, think, and act like a linguist,  and to recognize others when they do so.” So just learning isn’t enough you have to adapt to the standards of a linguist or in this immediate case a Chemist.